Loss is a crossing of movement, sound, images with no hierarchy : the three components have the same importance and create the same atmosphere. Loss is a lonely landscape where there no sign of time : an empty world, silent, not very clear but profoundly intimate. We want to reflect about the human being, with the doubt that his presence on earth is not so evident and necessary. How do human beings inhabit their space? Could the human being not exist at all? Could the History be made without him? The human being is welcome on earth; but, how does he enter in contact/ connection with nature?

LOSS is the requiem of the anthropocentric conception of the universe. It is the end of the Illusion. It remains only a big hallucination where a particular state of consciousness is reached. Loss is a requiem where the music never ends. It continues and amplifies. Loss is a requiem where the images describe a landscape presented in a strange scale. It is far form the ordinary. In the changes of perspective and proportions it gives an hallucinated vision of the reality. Loss is the requiem of the human body that speaks through the absent presence. The body is strong because it is resigned to the possibility of disappearing and is conscious of its relativity. 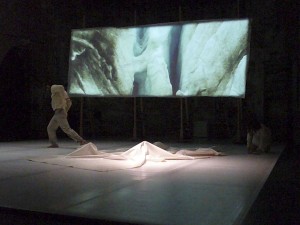